Ken Davis has over forty years of experience in corporate management, public service, and the private practice of law, almost all of which has involved some aspect of the continually evolving electric power industry.

Ken has advised clients about, or been responsible for, matters relating to corporate and project finance, corporate restructuring and strategic planning, the valuation of corporate investment opportunities, regulatory compliance, the regulatory analyses conducted by the federal government, and the procedures used to estimate the social costs and benefits of carbon emissions.

Combining the perspectives of an attorney, economist, and businessman, Ken writes and speaks frequently on a variety of topics related to regulation and regulatory reform, capitalism, property rights, the rule of law, and economic development. His articles have appeared in a number of publications, including The Wall Street Journal, the Washington Examiner, the Richmond Times-Dispatch, the Federalist Society Review, the FedSoc Blog, and reports of the Center for Strategic & International Studies.

In 2013 and 2014, Ken served as Deputy Attorney General for the Commonwealth of Virginia, responsible for matters relating to transportation, infrastructure, and land use. In that capacity, his clients included the Virginia Port Authority, Virginia Department of Transportation, and Virginia Commercial Space Flight Authority. Explainer Episode 37 – The Defense Production Act During War and Peacetime

J. Kennerly Davis, Jr. discusses the origins of the Defense Production Act and recent presidents’ invocation of the Act in pursuit of public policy objectives. Deep Dive Episode 228 – Does the Federal Energy Regulatory Commission (FERC) Have Authority To Regulate the Climate? 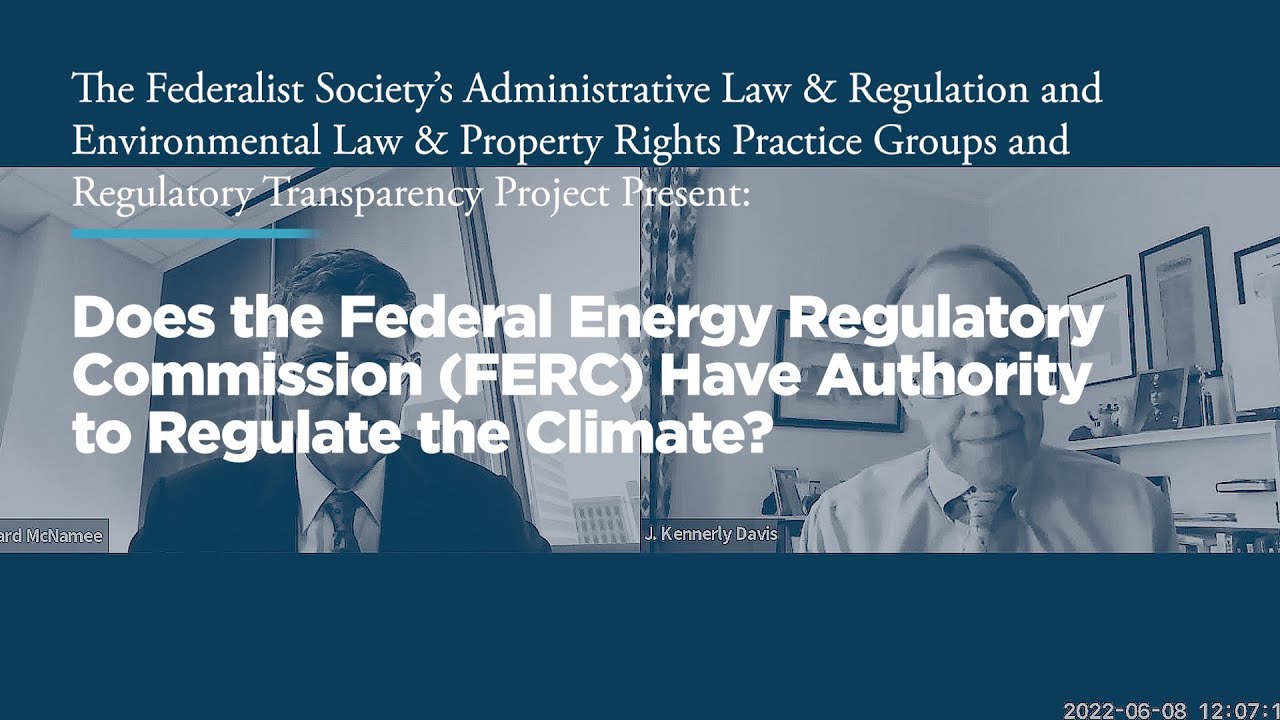 Does the Federal Energy Regulatory Commission (FERC) Have Authority To Regulate the Climate?

Ken Davis joined the podcast to discuss why and how President Biden’s memo on Modernizing Regulatory Review could significantly alter the regulatory review process. There is bipartisan agreement that the cost effectiveness of regulation could be greatly improved if regulatory agencies engaged in systematic retrospective analysis of the benefits and costs of the rules and regulations that they have previously enacted. Such analysis could identify for amendment or rescission specific regulatory provisions that have proven to be unnecessarily costly, counterproductive, ineffective, or simply outmoded.

The Irresponsibility of the Socially Responsible Corporation It is time, past time, for a thorough reassessment of the outsized role that modelers and their models have been playing in the formulation of public policy, the drafting of legislation, and the development of regulations.

Curbing administrative overreach to restore the rule of law is an ongoing project without an end in sight. But it’s clear that this most worthy project got a big boost on October 9.

Idaho has long been widely known for the natural wonders that grace its landscape: the rugged wilderness, the snow-capped peaks, the sparkling waters and, of course, the potatoes.

The Many Issues Raised by Senator Warren’s Wealth Tax

A strong argument can be made that Senator Warren’s proposed wealth tax would be unconstitutional unless apportioned. On the Future of the Chevron Doctrine

Joel Nolette is a litigation attorney at Mintz Levin in Boston, and an active member of the Administrative Law & Regulation Practice Group, currently serving on its Executive Committee. Management’s Duty to Restore The Rule of Law

Springtime is the season when most American corporations hold their annual meeting of shareholders.  In the course of a typical meeting, board directors will be elected and independent auditors will be appointed.  Management will report on operating results and earnings for the fiscal year recently ended, and will outline their strategic business plans for the future.  In their presentations, management will make the case that they are fulfilling the fundamental fiduciary duty they have to promote the best interests of the corporation and maximize shareholder value. Today marks the 60th anniversary of President Eisenhower’s proclamation establishing Law Day. Eisenhower dedicated the day to “distinguish our governmental system from the type of government that rules by might alone.” Regulatory compliance costs impose an enormous burden on the American economy, a hidden tax that we all must pay in higher prices and smaller paychecks. Can Regulations Come with Unintended Costs?

Can regulations come with unintended costs? They certainly can, and often do.