Jamil currently serves as Founder and Executive Director of the National Security Institute and as an Assistant Professor of Law and Director of the National Security Law & Policy Program at the Antonin Scalia Law School at George Mason University, where he teaches classes on counterterrorism, intelligence, surveillance, cybersecurity, and other national security matters, as well as a summer course in Padua, Italy with U.S. Supreme Court Justice Neil M. Gorsuch. Jamil is also affiliated with Stanford University’s Center for International Security and Cooperation and previously served as a Visiting Fellow at the Hoover Institution from 2016 – 2019.

Jamil N. Jaffer also currently serves as Vice President for Strategy, Partnerships & Corporate Development at IronNet Cybersecurity, a startup technology firm founded by former NSA Director Gen. (ret.) Keith B. Alexander. Jamil also serves on the Board of Directors for the Greater Washington Board of Trade, is a member of the Board’s Smart Region Movement Strategic Advisory Counsel, and is a co-chair of the SRM’s Cyber, Data Management, and Privacy Solution Group. Jamil is also an advisor to Beacon Global Strategies, a strategic advisory firm specializing in international policy, defense, cyber, intelligence, and homeland security; 4iQ, a technology startup focused on deep and dark web intelligence and identity theft protection; Duco, a technology platform startup that connects corporations with geopolitical and international business experts; and Amber, a digital authentication and verification startup.

In addition to these positions, Jamil currently serves on the Strategic Advisory Committee for the Global Cyber Alliance, the Advisory Board of the Foundation for the Defense of Democracies’ Center on Cyber and Tech Innovation, and is a member of the Center for a New American Security’s Task Force on Artificial Intelligence and National Security and the CNAS Digital Freedom Forum. Jamil is also a Fellow at the Academy for Judaic, Christian, and Islamic Studies, and is a member of the Board of Directors for the Center for Intelligence Policy, the Board of Directors of Speech First, and the Executive Committee of the International Law and National Security Practice Group of the Federalist Society, and is an advisor to the Concordia Summit.

During a brief break in his current positions, Jamil served as a law clerk to Justice Neil M. Gorsuch of the United States Supreme Court. Prior to his current positions, Jamil served on the leadership team of the Senate Foreign Relations Committee as Chief Counsel and Senior Advisor under Chairman Bob Corker (R-TN), where he worked on key national security and foreign policy issues, including leading the drafting of the proposed Authorization for the Use of Military Force against ISIS in 2014 and 2015, the AUMF against Syria in 2013, and revisions to the 9/11 AUMF against al Qaeda. Jamil was also the lead architect of the Iran Nuclear Agreement Review Act and two sanctions laws against Russia for its intervention in Ukraine.

Prior to joining SFRC, Jamil served as Senior Counsel to the House Permanent Select Committee on Intelligence under Chairman Mike Rogers (R-MI) where he led the committee’s oversight of NSA surveillance, NRO intelligence issues, and NGA analytic and collection matters, as well as intelligence community-wide counterterrorism issues. Jamil was also the lead architect of the Cyber Intelligence Sharing and Protection Act, the initial version of the cybersecurity legislation that was signed into law in 2015.

In the Bush Administration, Jamil served in the White House as an Associate Counsel to the President, handling Defense Department, State Department, and intelligence community matters, and serving as one of the White House Counsel’s primary representatives to the National Security Council Deputies Committee.

Prior to the White House, Jamil served on the leadership team of the Justice Department’s National Security Division as Counsel to the Assistant Attorney General for National Security, where he focused on counterterrorism and intelligence matters. At NSD, Jamil was one of the primary brief writers on In re: Directives, the first ever two-party litigated matter in the FISA Court and only the second case before the FISA Court of Review in its 30-year history. Jamil also led NSD’s efforts on the President’s Comprehensive National Cybersecurity Initiative, including the drafting of NSPD-54/HSPD-23, and related classified matters. For his work on these matters, Jamil was awarded the Assistant Attorney General’s Award for Special Initiative and was among the group of lawyers awarded the Director of National Intelligence’s 2008 Legal Award (Team of the Year – Cyber Legal).

Jamil also served in other positions in the Justice Department, including in the Office of Legal Policy, where he worked on the confirmations of Chief Justice John G. Roberts, Jr. and Justice Samuel A. Alito, Jr. to the United States Supreme Court.

Jamil has also served as a lawyer in private practice at Kellogg Huber, a Washington, DC-based litigation boutique, as a policy advisor to Congressman Bob Goodlatte (R-VA), and as a staff member or senior advisor on a number of political campaigns, including two presidential campaigns and a presidential transition team. While in law school, Jamil was a member of the University of Chicago Law Review, managing editor of the Chicago Journal of International Law, and National Symposium Editor of the Harvard Journal of Law & Public Policy. Following law school, Jamil served as a law clerk to Judge Edith H. Jones of the United States Court of Appeals for the Fifth Circuit and, later in his career, as a law clerk to then-Judge Neil M. Gorsuch when he first joined the United States Court of Appeals for the Tenth Circuit.

Jamil has published multiple op-eds and academic articles on foreign policy, counterterrorism, cybersecurity, encryption, and intelligence matters, and is the co-author of a book chapter with former CIA Director Gen. Mike Hayden on ISIS, al Qaeda, and other international terrorist groups in CHOOSING TO LEAD: AMERICAN FOREIGN POLICY FOR A DISORDERED WORLD (2015). Jamil has also written a book chapter on surveillance in the ABA’s LAW OF COUNTERTERRORISM (2011), and a number of op-eds and policy papers on national security, foreign policy, counterterrorism, and cybersecurity matters with former Attorney General Michael B. Mukasey, former NSA Director Gen. Keith B. Alexander, and former National Counterterrorism Center Director Matt Olsen.

Jamil has previously taught graduate-level courses in intelligence law and policy at George Washington University’s Elliott School of International Affairs and the National Intelligence University, and has testified before committees of the U.S. Senate and House of Representatives on counterterrorism, cybersecurity, and other national security matters. Jamil has recently appeared on a range of national television and radio outlets including CNN, Fox News, Fox Business, MSNBC, Bloomberg, Voice of America, and National Public Radio, and in various print and online publications, including the New York Times, Wall Street Journal, and the Washington Post on a range of national security matters including counterterrorism, surveillance, encryption, cybersecurity, and foreign policy issues. An expert panel breaks down Biden’s executive order on foreign-controlled apps and its implications for relations between the United States and its foreign adversaries. 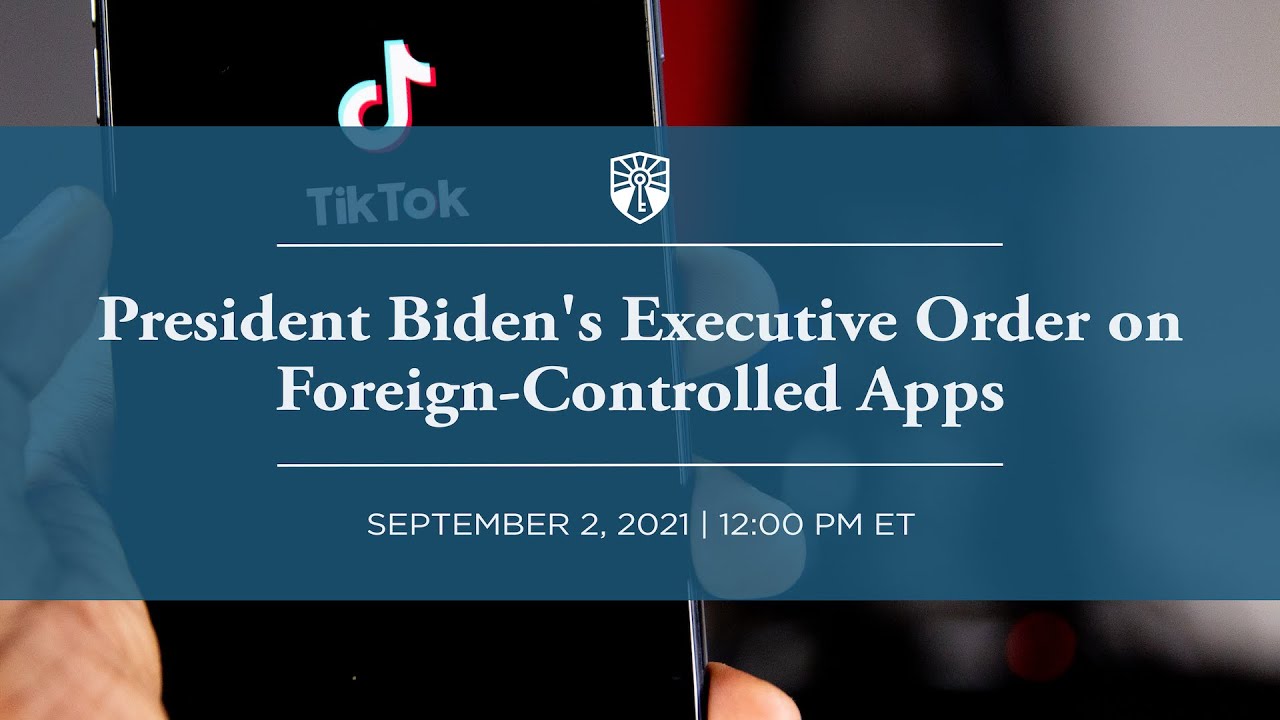 An expert panel breaks down Biden’s executive order on foreign-controlled apps and its implications for relations between the United States and its foreign adversaries.

How might the standoff over TikTok’s U.S. operations play out? Does the app pose a significant enough national security threat to warrant the forced sale? And how does this situation fit into the broader picture of U.S.-China relations? Are public-private partnerships the best way to fight cybercrime? If not, can the government alone protect the nation from cybercrime? If these partnerships are the way of the future, how could they be improved? Dmitri Alperovitch and Jamil Jaffer discuss these important questions and more.

Deep Dive Episode 32 – What to do about Facebook: On Data Privacy and the Future of Tech Regulation